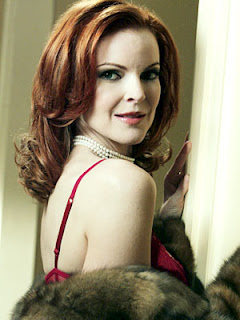 Never say Never!
Bree Van de Kamp’s breakthrough recipe
Being red-headed can be a symbol of venom and lust; people may judge you as the devil who wears Prada. However, it can mean that you’re the most elegant and determined woman anyone would dream of meeting someday.
Continuing our monthly expedition of character maneuvers, let’s introduce you to a very rich, yet irritating character ladies and gentlemen. This month she’s a woman who has eternal devotion to the people who surround her. She’s never given up on a single goal in her life. Her passion to identity draws her furthermore to glory and endless commitment. She has a passion for morality and always respects a person with high standards in life. Nevertheless, she highly appreciates her friends in Wisteria Lane and can never be happier that she’s living in Fairview, the most ideal part of Eagle State. A lot of people get provoked around her as she tends to be a perfectionist, but who cares?! As long as she’s the one who’s in control of everything, according to her, people can always stick it where the sun don’t shine!

Bree Hodge, formally named as Bree Van de Kamp after her deceased husband Rex, is the red-headed stylish bitch whom we watch each season in the wickedly thrilling series, ‘Desperate Housewives’ with sincere anticipation. She’s the cold-hearted broad who unmercifully yells at her kids every once in a while without the slightest reason why. She’s the wife who does it all; cooks all the meals, cleans the entire house, gardens the perfect yard, smiles to everybody, obeys her husband unquestionably, organizes the household, educates her children… etc. in addition, she has always been there for all her friends; Susan Delfino (the sentimental wife), Lynette Scavo (the hard worker wife), Gabrielle Solis (the trendy wife), and Kathrine Mayfair (the eloping wife). Despite the fact that she doesn’t agree with their way of living most of the time, she loves their company and unquestionably treats every woman as her own sister every step of the way. As long as they’re not invading her territory, she’s totally fine with it. She’s exactly like a lioness, protecting her youngsters from any unpleasant occurrences. As time went by, she has known what it’s like to love again and got married to Orsan Hodge; a very eligible dentist who succeeded to easily win her heart. Believe it or not, his obsession towards cleanliness was the trigger that turned her on every time she had doubts of marrying once more. They were a match made in heaven and it was obvious how she was passionate about their love spark.

Whenever you think of Bree, you can not help but admire her self-righteousness and definite will to change every turning point in her life. Without a doubt, that uptight icy-tempered lady has seen it all. She had marriage problems with Rex, had two teenage kids who have grown to be as rebellious as Ozzy Osborne along with his entire family, and even had an amazing battle with an alcoholic addiction after she started drinking heavily. Yet, she survived each and every obstacle that occurred in her way. She managed to sort out things with her late husband before he died, accepted the fact that her kids are entirely diverse, and personally checked herself into a rehab to regain her verve. Nonetheless, the list goes on and on. After marrying Orsan, she succeeded to bring her son Andrew back to her house after finding out that he’s been homeless for quite sometime. Also, she set faked a pregnancy to hide the fact that her daughter Danielle was to be scandalized with giving birth to child at that age. Then, she found out about Orsan’s responsibility of putting Mike Delfino into a coma after hitting him by his car. But, she convinced Orsan to get his sentence and found herself starting a Catering company with her neighbor and friend, Kathrine Mayfair, to help her get through that shameful incident. By attaining a huge business success, she became an overnight sensation and a new celebrity in Fairview after her cookbook got published, entitled; 'Mrs. Van de Kamp's Old Fashioned Foods.’

From the moment you lay your eyes on this lady, you’ll straightly think to yourself; “She’s definitely a pain in the neck!” But, you have got to think again because she’s the most caring and dedicated lady you’ll ever get a chance to come across. If you stop being judgmental for a second, you’ll know that this woman lives and breathes for the sake of others. I bet if you compare her to an Egyptian mom, they would be so much alike. Having almost the same qualities, Bree never knew when to pamper herself for the sake of her own individuality. She has always pictured herself as a lady and nothing more. She hasn’t thought of something else other than the people who surround her. She’s always been there for every single person who needed her. However, writing her cookbook gave her the self-recognition she’s been looking for. Yes, she did it! Experiencing all those events helped her to find herself and break through from the eternal frame of a married woman. As she was building her own career, she knew what it’s like to be effective and worth-living. Bree didn’t care about people’s resentment to her; she wasn’t threatened by the fact that she’s a housewife. In fact, being one helped her to achieve her ultimate dream. She knew what she’s good at and she looked straight ahead to achieve that vision. Her series of domestic dramas and tragedies made her into a very strong woman who can be set to accept any new challenges or mysteries life may bring along. With her zeal of cleanliness, she managed to pull out any sophisticated event or cater any wedding that holds over 500 people for example.

I know you might be thinking, “That only happens in stories.” But, here’s the thing; Bree Hodge was real! Her character was based on the actual mother of the series’ creator, Marc Cherry. And yes, that can also happen to you! You can lift your world upside down. You can see the light at the end of your tunnel and grab it. If you don’t have a vision, start having one. If you feel emptiness, read a book that helps you through the struggle. If you think you’re shallow, do something effective for once. Help the people in your life, have a purpose to achieve, stop thinking like a stereotype, develop your personality using your own mind, and do not wait for others to tell you what to do with your life. Believe in you! I know that your brain has no limitation and I’m sure you have thought of doing something you’ve been passionate about it for ages. Get a piece of paper and start writing down the list of things that you simply WANT. Everything comes step-by-step and never lose faith in what you deeply trust. Ignite your nerves and pray for eternal revival. Nothing cracks a person more than frustration and agony. Do not surrender to other opinions; yours count as well. Your inner soul comes before anything else and that’s not selfishness; that’s called self-awareness. Get introduced to your points of weakness to defeat them with glory. Educate yourself by any means. It’s never too late to find yourself my friend. Enjoy life whenever, wherever. Just Never say Never!