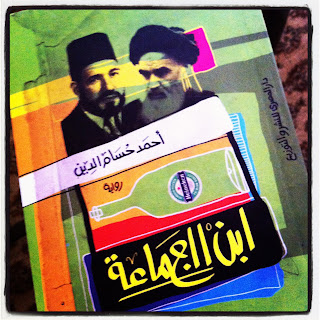 I have to congratulate myself for reading this book cover to cover. I didn't back off; I was determined to finish it once and for all. I knew it may take me quite some time to wrap it up, but I was delighted I was able to do so. Despite my personal insights on some elements in this novel, I couldn't help but wonder about its ending. You'll find a lot of my inputs in this review.

"Ibn Al Gama'a" is a novel written by a new Egyptian writer named, Ahmed Hossam Al-Din. It's obvious that's it's his first trial, however the plot is quite interesting to read. Indeed, its title is catchy, especially due to our current events in Egypt; how the Muslim Brotherhood are active and highly engaged in our political scene at the moment.

Narrating his own life story about how he was brought up among the MB community, Mustafa Mustafa Mahmoud Al-Taba'ei, the main character, starts by stating few detailed facts about his family and his home town, Al-Monofeyah. Moreover, he explains how his childhood was the best stage in his life, and how his relationship with his father was stronger than his brother, though they had different ideologies. This relationship is greatly important through out the entire novel, as how his father considers to be an idol among their community. It explains how the Muslim Brotherhood concentrates on the up-bringing of their children; concerning education, teachings of the Holy Qura'n and Sunnah, character building, ethics, as well as providing a large scale of resourceful funding to help them grow into very well-educated, sociable, intellectual human beings. Not to mention, the MB's long journey of Da'wah and their role in history-making, ever since Hassan Al-Bannah founded it. It's obviously crucial to them that their side of the story is delivered to their children, as not to get brainwashed by the Egyptian educational system, which kept picturing the military regime and our rulers as gods.

Later on, you'll notice what the author is trying to imply on how the MB have excellent eye on details. How well they are experienced when dealing with any governmental issue, how they take good care of their members, also how solid and patient they are when it comes to bringing back their rights. I strongly believe that the author created a character like Mustafa Al-Taba'ei, as a main character, to present the diversity of their members, elaborating how some of them may have theoretical conflicts with the MB, yet they chose to stay because they are afraid of the unknown. This is specifically shown after Mustafa started his college days. He was encouraged to be politically active for the sake of his MB community, yet acting sociable with different types of people than whom he had known his entire life, like his friend Samir, who was a very shallow guy, very much into drinking and partying. Also, Mustafa chose to keep a relationship with a girl, which led to a secret marriage, and this presents how he had a deep inner conflict about his life; how he lives two lives at the same time, not caring about any consequences may occur in the future.

Have no worries, the novel won't bore you a bit. However, you'll feel like it had to be longer. The writer definitely needs to work on developing it more in its upcoming versions. I won't spoil the ending, but I've to mention that it needs to be more tight and assertive.

If you still have second thoughts about reading the book, simply give it a try. You'll love its dialogues, and Ahmed Hossam's attention to details. He's obviously talented and has more novels to offer in the future. It's one of those novels which leaves quite an impact, raises a lot of questions in your head, and encourages you to learn more about your intentions, goals, and perspective in life even if you've grown to walk a single path.