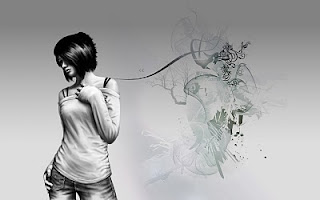 Just when you feel like the world is all fine and sound, you wake up to such an awful fact that it is not .. Just when you pull yourself together and start living normally once again, you get hit by a strike ..

You know what really irritates her? .. She keeps fighting and fighting everyday for that glimpse of light that she might see .. and I repeat MIGHT see ..

She perfectly knows that everyone has his/her own problems to fix, but she keeps wondering... when will it ever be her turn?

It always comes to her senses, why can't she just vanish from the face of the earth and never come again .. if she's just nothing but pain to all who surround her, then why the hell did they decide to let her exist ..

Is it so hard to understand that you give birth to someone to actually let him experience living?!
Does it really hurt to realize that you're dying sooner or later?
Is it really possible that someone could be that mean and stubborn?
Then again, viciousness has always been found itself side to side with kindness in real life ..

Life's balance always freaks her out .. Everything is just shocking and hurtful .. She always waits for that moment when she has to embrace the new obstacle .. Yet, she struggles and re-lives her path .. It's an endless cycle of venom and complexity ..

If only he understands .. If only he wakes up one day to realize how he'll be all alone .. If only he knows how much hatred he's building up instead of the so much love he would have gained ..
However, she keeps being true to him .. she keeps holding on to his stupid rules and irrelevant regulations .. She keeps convincing herself everyday that it will all end at some point pretty soon ..

Talking to her is lighting a torch in your mind .. Funny how she revives everything that comes near her .. Despite living in hell, she definitely loves life and looks forward to meeting it someday .. She always dreams of the day when she can wake up with no worries whatsoever .. It would be really nice to feel a kiss on her cheek as well .. Someone to caress her softly and whisper in her ears how pretty she is when she smiles or ever yawns for crying out loud .. But, that's just a fantasy of hers .. Her entire world is a fantasy .. She can't manage to live in the real world anymore .. She's not raised to face it .. She was the one who taught herself everything .. from scratch! She had no self-confidence .. She is always as nervous as hell .. whether in or outside ..

However, she's grown .. She has known what it's like to breathe, work, play, laugh, write, and live .. She's taking baby steps, but she did learn something .. In fact, she's learnt a lot .. She has been through hell and back ..

Don't think she'll have that happy ending you're waiting for .. No folks .. It never ends ..
That's reality and this is how it works .. at least that's her reality and that's how it works for her .. A lot of people may not grasp that fact, but what the hell .. What do they know about living like a zombie?! Simply nothing!