What if HOUSE was real? 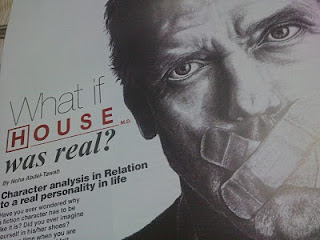 What if H O U S E was real?
Character analysis in relation to a real personality in life


Have you ever wondered why a fiction character has to be like it is? Did you ever imagine yourself in his/her shoes? Is there a time when you related to a movie and felt like it’s your own life they’re telling? The answer is simple. It is, indeed, your life!


These motion pictures are exactly what you are. With a little bit of imagination, everything comes alive. It all begins when a writer decides to write a story. One way or another, he/she chooses real people and real incidents to complete the sequence of his conception. When he/she comes up with a theme, they arrange the perfect plot to go with the exact setting… etc. But, that’s not what we’re going to talk about here. This is an actual attempt of what some people may call, ‘Self-digging.’

The purpose of this section is to make you more witty, smart, cautious, considerate, and wise. Who said exploring into people’s characteristics is a boring thing to do?! It’s actually one of the most exciting things you’ll ever have to try. It’s educational, informative, down to earth, and it also raises your attention to details. It would make you a better person as you explore the hidden feelings that someone may or may not have if they had to deal with you. In fact, it’s widely known that in order to understand people, you have to think like they do! Whenever someone raises their voice or starts to criticize you, remember it’s not their real nature; it’s their subconscious that speaks for them. It’s what they have experienced; it’s what they have faced in life that made them act the way they do. And that’s exactly why, ladies and gentlemen, we started this series of Character, or should we say, ‘Your Self-Analysis.’

As a start, we have chosen Dr. Gregory HOUSE; the famous M.D who dazzles us in each and every episode of his seasonal TV series ‘HOUSE.’ For most of you, HOUSE is just a lunatic arrogant bastard who forces his opinion on everyone without the slightest respect or consideration. But personally, I don’t think he is! In this article, you’ll know all about HOUSE; his ups and downs, his fatal moments, his self-struggle, his inner conflicts, his love to life… etc. You’ll be totally convinced that he’s not always as he seems. You’ll be introduced to his eventual mind games that he’s broadly famous for. You’ll take a tour within his mind and understand his simple ethics in life.

Dr. HOUSE's medical specialty is Infectious Diseases, Nephrology, and the most important of all Diagnostic Medicine. His biggest struggle would be his eternal leg pain, which he ultimately resolves it with an hourly dosage of ‘Vicodin,’ and that led him to an obvious addiction. Most people do not sympathize with a drug addict, but actually you’ll have to show HOUSE a bit of compassion and merriness. As he suffered from an infraction in his right leg, which was revealed to be a muscle death, he started living a completely different life that turned him into a misanthropic human being.

I always had this thought in my mind; what if HOUSE was real? What if he was a part of my life? What if I knew him in person? I came to realize that I would love to have someone like him around me. I would definitely benefit from such a logical and a clever guy. The thing about HOUSE is that he’s really intellectual and funny at the same time. Obviously, a person like him is very hard to find nowadays. If you decide to meet up with him for the first time, he would probably push you away. But, the real reason behind that is that he doesn’t really like to get attached to people. He’s really sensitive and friendly when you survive all his daily playoffs and plots. That’s why he chooses someone like Wilson, his best friend and colleague, in his life. Many would think to themselves; how could a person like HOUSE be friends with someone like Wilson? And, that my friends totally proves the fact that he’s a kind-hearted guy who just needs some support and tolerance. He never opens up to someone as he does with Wilson. If you really want to know how HOUSE is like, then observe him dealing with him. His childish games are only an attempt to get to really know you. His soul-digging personality is not about interfering, but on the contrary it’s all about real support and genuinity. His plain truth articulations are nothing but your self-righteous mind. He thinks, feels, and acts right away! He doesn’t wait for foolish gestures or silly sympathies. His willingness to go to extreme lengths for his patients and friends makes them trust him with their lives. They always ask him for consult not because he’s mean; it’s because he’s always right. He’s a diagnostic genius who lives and breathes on turning his patients’ lies into immediate treatments.

According to HOUSE, ‘Everybody Lies’ and that’s his ultimate motto. He believes that every patient has a dark secret here or there. Thus, the only thing he seeks is a new mystery, which to him it would be an impossible case. What really motivates him is when he discovers a new riddle, and for him it would mean a strange case. He likes the process of how he manipulates his medical staff and how he forces them to breakthrough their little mind boxes. He doesn’t feel like accomplishing something unless he finds a clue to the riddle all by himself. It gives him a sense of control. It makes him feel unique and extravagant. It’s like it gives him the pleasure he’s been always looking for throughout all his love relationships. If you were ever to deal with HOUSE, you will definitely need some time to adjust to his wicked sense of humor. You would have to read between the lines because he’s not a straight forward person. To him, it’s much more fun to play along your minds in order to dig up your deepest secrets. It gives him the ultimate pleasure to know something that no one else has came up with.

Just imagine what you would never have guessed in a million years; HOUSE acting like a sane person and looking out for the best of everyone without the slightest act of narcissism. No my friends; that’s not a fake imagination. Believe it or not, HOUSE has become well again! After spending a period of time in a mental rehab, he succeeded to overcome his long struggle with his hallucinations and self-distracting habits. He managed to be as normal as any person would react towards a problem or a situation. Personally, I wasn’t convinced that HOUSE could ever be that peaceful, which conclude us to the fact that change is undeniably possible. Yeah, anyone can change into a better person as long as he/she chooses to do so. Know that there will always be struggles and conflicts. There will come a time when you feel like dying and there will be a time when everything feels like it’s falling apart. But then, nothing lasts forever. Ever since the dawn of existence, there have been ups and downs, wins and defeats, as well as right and wrong deeds. And, it all leads to one point or another; YOU! It’s you who feel, it’s you who fight, and it’s you who take actions. Stand up for your morals and way of life, vote for your ideal figure, live each day like it’s your last, believe that nothing is beyond your reach, and broaden up your minds and souls. Embrace the power of choice people!