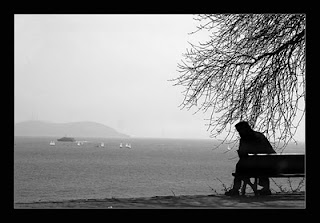 Time was never on his side. Over the years, he had grown accustomed to a certain system; a routine if you will. But, after 60 years, the moment had come to reflect upon the past. Holding the cup of tea in one hand and a cigarette in the other, he calmly stared outside the window at the falling rain. He felt alone, but it wasn’t foreign to him. He was used to it.

He had just gone out of prison and he kept telling himself that it’s never too late. But, he’s always reminded of what he’s done. He’s so self-centered, he can’t think of anything else but the murder he had committed once before. Till that day, he can’t imagine how he was able to do so.

He was always this bright young doctor who’s known to be one of the most decent persons on earth. He was honest and had the highest self-esteem anyone can hope for. He knew exactly what he wanted and he pursued it. He spent his 7 years of study with great efficiency and dedication. And as he graduated, he started to feel lost. Suddenly, the world he’s known has been torn apart. He has just found out that his sister had cancer. She was the closest one to his heart. You see, he had a strict family. Obliged by everything good and bad, he was forced to be that guy he never wanted to become. Yet, practicing medicine was the only hope he longed for. He pictured his life as follows; that he would graduate, finds a decent girl to marry, and honorably work as a doctor at any hospital. His dreams were simple, he had no ambition whatsoever and he was okay with it. But then, when he graduated, he sat with himself and started thinking about his future. He had never thought about that until that day.

“Hey handsome, what are you doin’ all alone?” his sister, Dalia, has just opened the door. Although she was struggling to walk, but her face was shining with a smile as if she was about to give her lover a hug. So as he witnessed her entering the room, he stood up and went straightly to her, trying to hold her down to sit. And she felt so exhausted to even take further steps ahead to the bed, preferring to choose the chair over a cozy cradle.

“What are you doing here? Aren’t you supposed to be in your bed?” he said.

“I came to check upon you. I’ve missed you, you know. I haven’t seen you in two days or so. I’ve been always asleep, taking my drugs and all,” she looked at him so peacefully. Although they were siblings, no one would ever imagine they actually were. Most people would see them and stare at them as if they’re those ones who look for a home to live together. They appeared to be relatives of some kind, lovers if people think decently. Except they were the most caring brother and sister anyone has ever known. They looked at each other, so attached to one another that no one can grasp that fact. They didn’t have the same mother, but they lived together. You see, her mother is dead of having the same disease and her father was re-married to his mom couple of years after that. She was 5 years older than him, but yet she looked so much younger. He was always so caring and kind to her. They were the sort of buddies who always get together through anything in life. He knew about her disease when she was 25 years old. Now she’s going on 30 and he has just turned 25.

“Dawoud, What’s up with you? You seem so pale,” Daila said.

“There’s nothing to be worried about, honey. I’m just a little bored, you know, and exahsuted.”

“Oh, come on! Don’t worry about anything. Just relax and let me get you back to your bed, you have got to get some sleep.”

“Dawoud! Enough sleeping, I’ve had it! You have got to tell me what’s wrong with you. You’ve been acting like this for a month or so. Can’t you stop caring about me for a while?!”

“I can’t, Dalia. You’re my sister and I would do anything in the world for you. Don’t you ever doubt that!”

“Of course, I wouldn’t! That’s why I’ve got a favor to ask you for, but promise me that you will do it,” Dalia anxiously looked at him.

“Anything, honey. Anything just for you!” Dawoud replied.

And just when he was about to finish his last breath of cigarette, the tea pot whistled as the water was boiling to death. He stood up, went to the kitchen and turned it off, but then he changed his mind. He’s hardly eating anything either. It’s been like over 12 hours since he last tasted something, so he decided to get a pack of noodles and cook it in the hot water instead. It was just a little snack to get him going, he only needed that. Dawoud was quite a slim guy, he didn’t eat much. He didn’t enjoy food, nor he had a passion for it. As he grew up, he just accepted the fact that life is so ordinary. He couldn’t find a pleasure in food as most people would do, other than seeking a true identity for themselves. Instead, he used to live on cigerettes and thinking. He did nothing but thinking, thinking, thinking… and he didn’t have that much sleep either. After he finished his noodles, he decided that he has to sit and write down couple of friends’ names, so he can get acquainted once again to the real world.
Suddenly, he couldn’t think of anyone else but his sister. He kept thinking about her this entire day and how she was so alive, but he wasn’t. He was the one who’s gone to everywhere, seen lots of people. Everyday he met up with whoever, and yet she loved life like no one he’s every known. He used to get back from work and read to her; she loved hearing his voice. He always read her novels; she used to love that.

“Okay, sweetheart. Just take it easy. Let me tuck you in,” he caringly replied.

“No, Dawoud, thank you. I’m feeling warm already. Can you open a window for me, or maybe the AC?”

“You know the Air Conditioner is not good for you. Let me open a window and switch on the fan instead.”

“Okay, Okay… Just don’t push me like that. You know I’m your brother and all.”

“Oh sure, you’re my brother and I’m supposed to do what?! Say thank you ALL THE TIME?!”

“No, I’m not Dawoud. Just leave me alone for now please.”

“Fine, honey. I won’t disturb me longer. Sleep tight, sweetheart,” he replied, as he looked so worried.

“Whatever! Good night,” she slowly rolled herself over the right side of her bed. She always loved this side as it faces the window and she would watch the stars each night.

The moment before Dawoud turned off the lights, he gazed at her. She looked so powerless and tired. She had difficulty to breathe that day; the disease was getting stronger and stronger.

The phone has rung its bell and he went to pick it up; it was his neighbor, Mr. Ahmed. He was an old man around 85 years old, who lived on his own. He was so thrilled to have a neighbour like Dawoud. He had always wanted to talk to someone, and Dawoud was his savior from his eternal loniness. Dawoud wasn’t bothered by him, except when he’s in his terrible mood swings. Mr. Ahmed loves to talk about his past life and Dawoud loved to listen, but then again sometimes he was feeling irritated by the company. Dawoud wasn’t used to having talks to anyone since a very long time. He’s grown to be a loner; a kind of guy who enjoys the company of himself and no other.

“Hello, Dawoud. How you’re holding up in such weather? I just called to check upon you.”

“Well, Hello Mr. Ahmed. I’m fine, don’t worry about me. Thanks for asking though.”

“What you’re up to son? Would you like to join me for dinner? You’ve promised me that visit, you know.”

“Oh, I did? I can’t recall… Maybe some other time, I’m about to sleep now. Go ahead to start eating, I have eaten already. Thanks again!”

“Okay, then… Although it’s been a week and I’m starting to worry about you. You’re gonna have to go out more often. You know you’re welcome to come by anytime you like.”

“Oh, I know Mr. Ahmed. I’m gonna do that, I’m just trying to get a grip on some stuff that I have in mind these days. Don’t bother yourself, though. I hope you don’t mind, I need some time for myself these days.”

“Sure, son! Take your time, just take care. I’ll be here if you needed me.”

“Thanks again, Mr. Ahmed. No worries, God’s willing. Take care yourself. I’ll be seeing you soon,” Dawoud hang up the phone and thought to himself, “ I wonder who’s taking care of whom? Aren’t I supposed to take care of this old man? He sure is a kind friend.”

Then, he went back to the piece of paper he was trying to put some names in. Out of the blue, he remembered someone at the hospital where he used to work before his sentence. She was a friend… they used to have regular chit chats everyday at the food court during their break times. They have always had those discussions that no one cared about or seemed to be interested in. They had completely different lives, different shifts, but the one thing that joined them together was those talks. They never tried going on a date for once or something, but he’s been meaning to ask her someday when he had the nerve to do so.

Her name was Laila, she always reminded him of his sister because of their rhyming names. Laila was a medium height with a reddish brown hair and lovely dark brown eyes. She looked incredibly cute and had an amazing smile that lightened up the crown. Everyone at the hospital loved her; she was nice, simple, professional, and honest… yet, daring, intellectual, and always fun to be with. Dawoud started wondering, “Why haven’t I ever asked her out? Maybe, just maybe, she would have said yes.” So, he wrote down her name… Laila. It was the first item of his ‘To Do’ list: Laila! But then again, how would he meet her… How would he find her… What would he tell her?! He started reciting in his mind, “I’m Dawoud and I just got out of prison?!” And, how would she respond? “Will she be careless about it and let us move on with our talks once again?” He has missed all sorts of discussions. He has spent all the entire time, while he was at prison, on his own. He had no friends whatsoever and the only time he was free, he used to stay at the library. It was very harsh to survive such sentence; he couldn’t help it but regularly deprive himself from any moment of solitude. If anything that was entirely his, it was only ‘TIME’ … he had lots of it.

Your feedback is much appreciated .. Thx :)