Street Art… Or Is It? 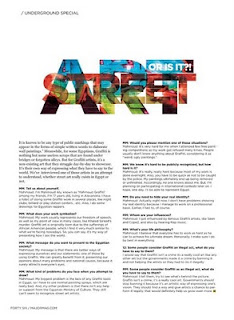 Street Art… Or Is It?
According to Wikipedia.com, Graffiti “is any type of public markings that may appear in the forms of simple written words to elaborate wall paintings.” Meanwhile, for some Egyptians, it’s nothing but some useless scraps that are found under bridges or forgotten alleys. But for Graffiti artists, it’s a non-existing art that they struggle day-by-day to showcase. It’s their own way of expressing what they have to say to the world. We’ve interviewed one of those artists in an attempt to understand, whether street art really exists in Egypt or not.
MM: Tell us about yourself.

Mahmoud: I’m Mahmoud Aly, known as ‘Mahmoud Graffiti’ among my friends. I’m 17 years old, living in Alexandria. I have a habit of doing some Graffiti work in several places, like night clubs, billiard or play station centers… etc. Also, I do some drawings for Egyptian rappers.

MM: What does your work symbolize?

Mahmoud: My work usually represents our freedom of speech, as well as my point of view in many cases, like Khaled Sa’eed's murder. Graffiti art is originally born due to the sufferings of African American people, which I find it very much similar to what we’re facing nowadays. So, you can say, it’s my way of presenting how I see the world.

MM: What message do you want to present to the Egyptian society?

Mahmoud: My message is that there are better ways of expressing ourselves and our statements; one of those by using Graffiti. We can greatly benefit from it, presenting our opinions about many problems and national causes, because it surely attracts everyone's eyes.

MM: What kind of problems do you face when you attempt to draw?

Mahmoud: My biggest problem is the lack of any Graffiti tools in Egypt, so I have to use normal painting sprays, which are really bad. And, my other problem is that there isn't any help or support from the Egyptian Ministry of Culture. They still can’t seem to recognize street art artists.

MM: Would you please mention one of those situations?

Mahmoud: It’s very hard for me when I attended few free painting competitions as my work got refused many times. People usually don't know anything about Graffiti, considering it as "weird, ugly paintings."

MM: We know it's hard to be publicly recognized, but how hard is it?

Mahmoud: It's really, really hard because most of my work is done overnight. Also, you have to be quick as not to be caught by the police. My paintings ultimately end up being removed or unfinished. Accordingly, no one knows about me. But, I’m planning on participating in international contests later on. I hope, one day, I’ll be able to represent Egypt.

MM: Do you need to hide your real identity?

Mahmoud: Actually, right now, I don't have problems showing my real identity because I manage to work on a professional basis. Earlier, I had to, of course.

MM: How long have you been practicing Graffiti?

MM: Does it require any courses? Is it something to be taught?

Mahmoud: Of course, you’ve got to have talent. However, if you’re serious about it, there are couple of courses available abroad. Unfortunately, there aren’t any in Egypt.

MM: Whom are your influences?

Mahmoud: I got influenced by famous Graffiti artists, like Seen and Cope2, and also by hearing Rap music.

Mahmoud: I believe that everyone has to work as hard as he can to achieve his ultimate dream. Personally, I make sure I do by best in everything.

MM: Some people consider Graffiti as an illegal act, what do you have to say to them?

Mahmoud: I tell them, try to see what’s behind the picture. Graffiti isn't a crime, it’s a really cool art. Governments should stop banning it because it’s an artistic way of expressing one’s vision. They should find a way and give artists a chance to perform it legally, that would definitely help us grow even more.