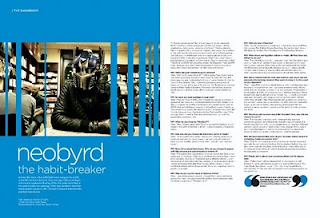 NeoByrd: The Habit-Breaker
In times like these, when industrial music conquers the world, artists like NeoByrd obviously shine amongst millions of singers and musical vagabonds. Starting off his first professional step in his musical career two years ago, Wael Alaa decided to show the world what he has got to offer. We had a chance to interview him, and that’s how it went.
“In Egypt, people are familiar with all types of music, especially Rock. However, the Electronica genre is the one genre that has grabbed my full attention since my childhood,” Wael explains to Major magazine. He is the type of musician who draws the attention of not only people who enjoy music through an emotional perception, but also the intellectual ones who appreciate an artistic phenomenon when it declares its presence. Wael Alaa is a self-taught keyboardist and producer, who formed an Electronica project called “NeoByrd” in 2009. Influenced by artists, like Depeche Mode and Michael Jackson, he is determined to present an innovative style of music that Egypt has not been familiar with, ever before.

MM: Let’s start off by asking, How old are you and what do you study?
Wael: I’m 23 years old and I’m still attending the Faculty of Mass Communication, MTI University.


MM: When did your interest in music develop?
Wael: I started playing the piano when I was 12 years old. And, like most guys my age, I enjoyed jamming with some friends of mind by forming Rock bands. Also, I started to produce some pieces of music on my own at the age of 14, and my first Techno track was featured on Pulse Radio in England. However, I did not take a professional step at that time; I was still trying to gain some experience first.


MM: So, did you keep working on your own?
Wael: Well, no. Around 2004, and through my way up to college, I signed off few tracks with a German label and another English one. Then, I stopped for a while.


MM: Why did you do that?
Wael: I wanted to form a band on my own. In 2005, I started thinking of creating this NeoByrd project, hoping to find someone as passionate about it as I am. I experienced some difficulties because most Egyptians are into Rock and that wasn’t the concept I had in mind at that time. However, I went on with my preparations and here I am.


MM: What do you mean by “NeoByrd”?
Wael: “Neo” means classic and “Byrd” is a symbol of fantasy, which explains the state of fantasia that I am trying to express through my music.


MM: And why did you choose the Electronic genre of music?
Wael: I find myself in this genre. I feel so comfortable, wearing my mask and performing live on stage. I wanted to be different and have my own identity. Electronica is what I love; it’s how I express myself.


MM: Now, tell us about that please. Why do you choose to appear with this persona and choosing not to remove it?
Wael: The point is that Egyptians still did not accept the Electronica genre due to the huge influence of the Rock era we have been living in for decades. So, I couldn’t present such a different element without a sense of entertainment. I just wanted to be an exceptional performer and grasp their attentions by any artistic means. I have a worldwide target, yet my Egyptian identity is very important for this project to spread.


MM: Who are your influences?
Wael: Michael Jackson is my main and ultimate influence of all time, then comes The Rolling Stones, Bee Gees, Donna Summer, Doors, The Beatles, Air, Daft Punk, Prodigy, and The Chemical Brothers.


MM: What about our Egyptian culture or music, did they have any influence on you?
Wael: They definitively did, but I was very much into the idea of producing music by a machine. I have grown to like electronic instruments more than any other musical devices. I personally think that the Electronica genre basically depends on your intellectual skills. It’s very hard to invent or create a different mood by utilizing it, when you are not relying on your emotional side, like other genres.


MM: We’ve noticed that the ones who listen to your music are not precisely into dancing, however they seem to enjoy it. Is this a part of your objective?
Wael: Indeed! My show is all about being artistic more than just playing music. I’m a performer and I use some enhancements, like my mask and my Vocoder, to present my own concept. What I perform is not industrial, that’s why I receive lots of adverse feedback. Some people may appreciate art and some may not; it is really unpredictable and I do not let any negative opinion pull me down. On the other hand, it really helps when people start questioning what I do; it gives them something to remember me with. Also, I’m inspired by a guy called Jeffrey Daniel, who used to choreograph Michael Jackson’s dance routines. I use some of his dancing tricks to boost my show.


MM: Would you tell us more about the Vocoder? Also, why did you choose to use it?
Wael: The Vocoder is an electronic instrument that analyses someone’s speech, generating it into specific musical sounds. It is hard to use, that’s why it’s not so popular among musicians. Michael Jackson used it couple of times in his music, though. I love using it as my vocal because it is very mind-provocative. It produces an e-sound, which completes the illustration I want to present.


MM: Why do you use the mask of Optimus Prime?
Wael: I was doing a basic research through the internet and came across this mask. I instantly loved his neutral facial expression; plus, I’m already a big fan of “Transformers.”


MM: We have noticed that most of your YouTube videos are full of animation, Could you explain why?

Wael: Well, I’m very much inspired by animation movies because it portraits the same state of fantasy I try to display. I believe that creation and creativity are obtained by living in an imaginative world. As being an artist, I should invent; I should not produce something recognizable to everyone.


MM: Finally, tell us about your upcoming album and its release date.

Wael: “Falling Away” will be released within two months. It will include 10 tracks, introducing a variety of genres; Electronica, Trip Hop, Break Beat, Disco House, Funk… etc. Also, I would like to mention that I’m the one who composes my entire tracks and write my own lyrics.