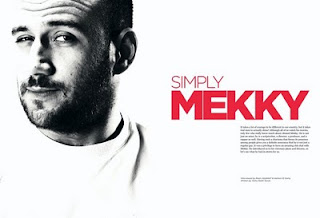 
It takes a lot of courage to be different in our country, but it takes real men to actually shine! Although all of us watch his movies, only few who really know much about Ahmed Mekky. He is not just an actor; he is a scriptwriter, a director, a producer, and a rapper as well. Having such a charisma that forces its presence among people gives you a definite assurance that he is not just a regular guy. It was a privilege to have an amazing chit chat with Mekky. He introduced us to his visionary plans and dreams, so let’s see what he had in stores for us.


MM: The first question we have got to ask you, Is ‘Ahmed Mekky’ your real name?
A.M: Indeed, let me tell you about my origin as well. My father is a descendant of a 4,000 years old Bedouin tribe called, “Bani Helal.” Some of them went to Upper Egypt, while others, including my father, traveled to Algeria. They were famous of speaking classical Arabic and glorifying poetry. Then, we went to Emirates in the 80’s when it was still a desert, and there were couple of Americans who started working there as well. I had the chance to be acquainted with them at their house parties and Hip/Hop was on the rise. Also, I used to sit with my father and his friends, reciting poetry in a manner that pretty much resembles the freestyle battles of Hip/Hop. Thus, I personally believe that the original Rap genre descends from an Arabic origin and the rhythmic beats come from Africa. 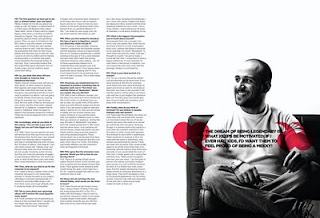 MM: So, you think that when Africans were brought to America, they introduced Hip/Hop.

A.M: Exactly! America took Africans as their slaves, so Afros started to express their agonies and anger through some beats that made them feel free. By then, the genre was presented and this is how I want to present my album. I am not going to blindly imitate Americans by wearing blings for example. No, I want to bring back the true spirit of Rap by showing our own Arabic identity. Even when I played the role of ‘H. Dabbour,’ I insisted that he wears a ‘Gallabeya’ when he began to blend in the Egyptian society for instance. There has to be an Egyptian icon in what I represent.


MM: Accordingly, what do you think of this saying: “You can take a guy out of Egypt, but you can’t take Egypt out of a guy?”
A.M: Well, I have my own opinion; be yourself and be local, then you’ll turn into an international artist. By the way, I won several awards from festivals held in Argentina and Italy in writing/directing short movies, like “El Hassa Al Saba’a” (the original 7 minutes short movie) and “Yabany Asly,” just because they were too local. Americans are not usually moved by action movies, but they are more into personal struggles or psychological dilemmas. Our local character is what drives them crazy and make them more interested in what we present.


MM: Then, what do you wish to do for this character to be exposed?
A.M: I need to show a clearer vision of this character because it is not observable enough. If I locally focused on any project, ultimately it will shine internationally. If I started to sound like R & B singers with their thick voices and rough attitude, then it would be totally off incompatible.


MM: Tell us more about your album; will it enclose the usual Egyptian music beats?
A.M: It will combine a bit of everything as long as it has a twisted flavor. I usually use four beats, like the song “Dawwar Be Nafsak” from the movie “Teer Enta.” It began with a hardcore start, heading to an Eminem-like chorus with an eastern touch, and so on. I have to have my own impact on the stuff I produce; that’s how I learned from my greatest influence “2 Pac.” I do write my own songs, but I do not mind working with others as well.


MM: When you first wanted to introduce this type of genre to Egyptians, weren’t you afraid they might not get it?
A.M: Of course, it was possible. However, I believe I understand the Egyptian people and the Egyptian culture to a good extent due to my numerous experiences. I started working at the age of 11 as a dove breeder, and also tried other fields, like boxing, caricature drawing, video editing… etc. All of these experiences helped me in understanding what people want and prefer. Not to mention, I have always been passionate about rapping and I’m very much determined to do something I love even if it didn’t succeed. This is what keeps me motivated.


MM: Previously, you mentioned how it is important to produce something with an Egyptian spirit, but in “Teer Enta” you used the theme of “Bedazzled.” Would you explain why you did that?
A.M: Well, it had a different concept, but the idea is the same and I have mentioned this in the movie. It is all about how you see an idea; we usually think of the same ideas, but with different angles and dimensions. If you are going to take an idea and apply it exactly as it is, then you are simply a robber and you should change your career. However, if you used the same idea, but applied a different point of view, then you deserve an applause. And by the way, the idea of “Bedazzled” was taken from the original production in 1967 and it had the same name. I love watching old school movies, where real drama was portrayed, before using excessive graphics and computerized programs. These movies teach you a lot because they have depth and sense of purpose, and this is exactly what I did in my movie. The ending was totally different and the characters were real Egyptian individuals.


MM: We agree that the characters were genuine. Would you tell us how do you develop them?
A.M: There is an acting school course called, Physical Action, which teaches you how to gather the tiny details of each character. I have gained some analytical skills myself along the years, which help me a lot. So, I observe people and add my own character lines as well.


MM: For those who do not know the real Ahmed Mekky, what would you like them to know?
A.M: I hate the era we are living in nowadays. I always dream of being in this age, but living during the 60’s or the 70’s. I really hate technology. I cannot seem to go around, carrying a mobile in my hands; I usually forget it even exists. Although I have a great social life, but you will find that most of my close friends are really old. I also enjoy camping and barbeques; I am in love with nature. I believe the greatest pleasure in life is women and the most obsessive interest for me is music. I am a music fanatic; I enjoy listening to all types of melodies. It is all about simplicity to me.


MM: What is your ideal portrait of a woman?
A.M: To me, a woman should be intellectual and feminine at the same time. If you recall women at the 60’s for example, you’ll notice how they were amazingly elegant and smart as well; it’s not all about the looks. You have to ask yourself; if she had the charms, Will be able to communicate with her or just neglect her existence later on? And this goes out to both genders; If you’re really into someone, you’ll enjoy their conversations.


MM: What is the biggest misconception you’ve heard about yourself?
A.M: Most people think I am a boogie man, who’s only into parties. But, what they do not know is that I’m a man of principles; that’s why I admire Mel Gibson’s personality for example. His movie “Braveheart” is what made me love this career. One day, I thought to myself, “I’ve got to make a movie like this one!” I would love to leave a legacy behind me. If I ever had kids, I’d want them to feel proud. In addition, I am not a hypocrite and I only work with the ideology I believe in and stand for.


MM: Finally, what do you think of feminists? Do you believe in equality between men and women?
A.M: Total crap! Nevertheless, this does not mean that men are better than women. Let me break it down for you. If we are exactly the same, then both of us should go swimming with one piece. Seriously though, if a women thinks she’s equal to a man, then she wouldn’t need him in the first place. In other words, both genders find strength in each other’s weaknesses. There would be no essence to life if we were both the same in everything. Also, women are passionate by nature. If they are really into someone, they would totally agree to do all the choirs they hate in an extremely sensual manner. Only those who are really in love would relish the scent of their men. I totally agree with a saying that mentions how, “Real women recognize real men, and vice versa.” I am the type of person who adores successful, independent women; it is such a thrill to be loved by them. It is a shame how men, nowadays, find this quality demeaning. Encouraging women to empower themselves is a huge cause. They don’t recognize a man by his physical appearance, nor his riches; women crave for men with real characters. At the end, this is what should really matter for both of them.