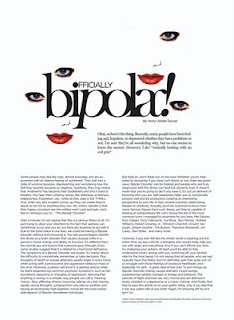 Recently, many people have been feeling sad, hopeless, or depressed whether they have problems or not. I’m sure they’re all wondering why, but no one seems to know the answer. However, I do! *wickedly looking with an evil grin*

Some people may feel like crap, almost everyday, and are acquainted with an intense feeling of numbness. They sink into a state of unconsciousness, daydreaming and wondering how the hell they recently became so negative. Suddenly, they may realize that ‘Anathema’ has become their Godfathers and find it hard to breathe. You hear them uttering words, like ‘darkness, emptiness, helplessness, frustration…etc,’ while all they seek is the ‘THRILL.’ And, when any dire incident comes up, they can swear they’re about to set fire to anything they see. Yet, what’s weirder is that their happy occasions are the wildest ever! Lads and gals, we’d like to introduce you to… “The Bipolar Disorder.”

Wait a minute! I’m not saying that this is a serious illness at all. I’m just trying to draw your attention to the fact that sadness can sometimes occur and you do not have any business to do with it. Due to the total chaos in our lives, we could be having a Bipolar disorder without even knowing it. You see, psychologists identify this illness as a brain disorder that causes unusual shifts in a person’s mood, energy, and ability to function. It’s different from the normal ups and downs that everyone goes through. Even, some studies suggest that it is related to a hormonal deficiency. The symptoms of a Bipolar Disorder are severe. It’s mainly about the difficulty to concentrate, remember, or take decisions. Plus, thoughts of death or suicide attempts usually linger in one’s mind, while acting with a provocative and aggressive behavior most of the time. Moreover, a person will know it is getting serious when he starts experiencing common psychotic symptoms, such as hallucinations, delusions, or thoughts of oppression, denying that anything is wrong. In a simpler way, people can call it, ‘Hearing Voices.’ Also, afflicting chronic insomnia, talking very fast, having rapidly racing thoughts, jumping from one idea to another, and having an excessively high euphoric mood are the most noticeable aspects of Bipolar disordered individuals.

But hold on, don’t freak out on me now! Whether you’re interested to recognize if you have such illness or not, there are good news. Bipolar Disorder can be treated and people who are truly diagnosed with this illness can lead full, dynamic lives. It doesn’t mean that you’re going to die if you have it; it’s just an element of knowing who you are. Self-awareness helps you to functionally process well and be productive, creating an interesting perspective to your life. In fact, several scientists relate being Bipolar to creativity. Actually, you’ll be surprised to know how many famous figures have such illness, yet they’re capable of leading an extraordinary life. Let’s review the list of the most common icons I managed to assemble for you here; Mel Gibson (Actor and Director), Kurt Cobain (Lead singer of Nirvana), Ozzy Osbourne (Singer), Axl Rose (Lead singer of Guns ‘N Roses), Ben Moody (former Guitarist of Evanescence), Robbie Williams (Singer and former member of Take That), Robert Downey Jr. (Actor), Winston Churchill (British Politician), Vincent Van Gogh (Artist), Johann Goethe (German Writer and Polymath), Edgar Allan Poe (Poet and Literary Critic), Tim Burton (Producer and Director), Theodore Roosevelt (American President), Jim Carey (Actor), Ben Stiller (Actor), Russell Brand (Actor)… and many more.

However, if you ever felt like the whole world is blacking out the entire time, go see a shrink; a therapist who would really help you out with steps and everything. And if you can’t afford one, then try analyzing your actions. At least you’ll be able to fully understand what’s wrong with you, switching off your devilish side for the time being. I’m not saying that all people, who are sad, typically have this illness, but I’m definitely sure that quite sum of us struggle with those feelings of excessive heartbeats and – especially for girls – a great deal of hair loss! To sum things up, Bipolar Disorder, mainly, causes dramatic mood swings, experiencing ruthless changes in energy and behavior. The periods of highs and lows are very normal and are defined in levels; whether in a depressive or a manic manner. And finally, feel free to pass this article on to your gothic fellas, only if you feel that it has any useful info of any kind! *Again, I’m showing off my evil grin*

*Most of the scientific data are extracted from the Bipolar Disorder reference of the National Institute of Mental Health in USA.